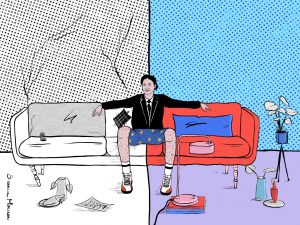 There is no doubt that positive thinking is an asset that shouldn’t miss from our lives. It is a mandatory tool that shouldn’t miss from any leader toolbox. But to be honest, it can spin the life for anybody, not only for the ones who lead. We hear this all the time but how does this really work? A recent, quite funny, event made me aware of this much more than before. I was so thrilled about my ‘Captain Obvious’ like discovery as I am when I’m eating pizza: I displayed a huge dumb smile on my face and I totally ignore the little tinny voice far away in the background who’s asking if there is any drawback to this. Usually that voice is expelled by an instant yell from my entire body which says “No, just enjoy the pizza dude”. Note to readers and myself: do not ignore the voice, there is always a drawback.

Short unrelated history event. Romania, Baia Mare, year of 1996, early spring. I was in the twelfth grade and for the ones who are not remembering those times, in the entire Baia Mare city there were only 2 cinemas. GoldenEye, the newest 007 movie was just released. Pierce Brosnan and Izabella Scorupco were staring for the 007 fans, which were us. It was the first day of second trimester and obviously the entire cinema was full of students. We got tickets in the first raw which was awful. But the experience turned out to be priceless. I was sitting near my good friend Ovi. Right next to us was this guy who had figured out what life was. He was making comments very often about things that happened in the movie. “Captain Obvious” like comments. He was not ill intended or had an urge to look smart. He was literally caught in the movie’s nets. 30 years later I still remember many of those remarks. One of them was absolutely brilliant. Brosnan and Isabella’s plane crashed on an island. So there were only the two of them. Him, unshaved, dirty but still with his 007 manly macho look. She a gorgeous young woman, as beautiful as the first sunshine in a winter morning. They were laying down on the ground after the crash. The camera zoomed on his eyes and slowly it started to zoom out while the suspense riched  alarming levels in the big cinema room. The guy near us literally stopped breathing. When the entire Brosnan face was fully visible he cleared up the suspense for the entire cinema. He literally yelled: “this is him”.

Short unrelated current event. With two small kids the free time for me and my wife is very limited. Kids are growing and it started to be better and better. In a desperate urge to get back in control of our lives, we took adventure into our own hands, left the kids with the grandparents for a couple of hours and we went  to the cinema. This happened last week and we saw “Cool Daddy”. A nice and easy french comedy. Very relaxing. And as we were enjoying the movie I slowly started to switch my focus from the movie to the guy near me. Thirty years later he was there again. Not the same guy of course. But the same pattern. I have started to enjoy more his comments than the movie. It might have been a couple of scenes where I was the only guy laughing. This guy had the same behaviour: fully caught by the movie’s nets he was full of comments on board with close to zero understanding on what was actually happening on the screen. There was this scene where the cool daddy was trying to protect the honour of his ex and act like he was afraid of the current partner of his ex. The new ‘Captain Obvious’ was totally disgusted: “I can’t believe that he is afraid of that loser”. I instantly texted Ovi that our GoldenEye guy is back and he strikes again.

The thorn is part of the rose. It all depends what you choose to see. So the movie is getting closer to the end. The Cool Daddy and his ex were giving up on any chance to get back together and they were close to sell their old apartment. A pretty nice one with small stairs inside which lead to a cool upstairs office room from where one see the rest of the area. So they were on the verge of selling it.  The entire apartment was empty and ready to be forgotten. They threw  a last nostalgic look back. In that moment I was thinking about how the apartment looked before, how different was the empty apartment and how much potential the place had  to look even cooler than before. That instant moment I heard the guy near me: “What a dump”. Being focused on the guy’s remarks this hasn’t gone unnoticed. It really stroke me how big was the difference between the two ways of thinking. So simple and yet so powerful.

“Too much love will kill you” states one of Queen’s song, one of the best rock bands ever. So is there anything bad in a slice of pizza? Is there any drawback in seeing the glass all the time half full? It might be. We see the potential, we see the good part, but if everything is ok and if everything is perfect, we might stop asking questions. This is definitely a way that affects our capacity to be open to more possibilities. It is awesome to consider the positive aspects and see the potential of something. Adding to this the attention to details and the capacity to not be blindsided by the greatness of the pizza opens thousands of possibilities.

Being intentional about this is a way to model our way of thinking. If it doesn’t come natural it definitely can be educated. And it is very easy to switch from a negative thought to something bigger. A simple question like “how can we make the apartment look better” can change the entire dynamic of the thinking process. It can switch from seeing the dark in things to a positive constructive attitude. This is a must, if as leaders, we want the other to follow us.

In the end, I challenge you to think of a recent event in your life. Think of the natural reaction that you have had. Think of  your first reaction. If it was a negative one then just ask a turnaround question and see how do you feel when you find answers to that. I bet on a slice of pizza that the feeling is awesome.